Blue Bird has released a new version of the Ford 6.8 L HD-OBD LPG with an Ultra Low NOx 0.02 emission designation. This new emission feature will help to open new doors to higher funding levels of grant opportunities that require a lower emission than the current 0.05 NOx standard. This is another Blue Bird-Roush CleanTech exclusive and will set the standard for school bus engines with ultra-low emissions. 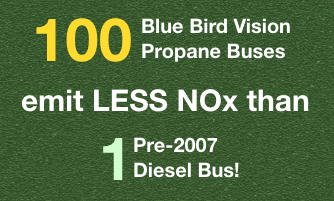 Perfect for districts looking to:

with the 0.02 Ultra-Low NOx option when compared to a 2007 or older diesel bus

Here are the facts, and how our Ultra-Low emissions can help you: